Myeloma Awareness Week is 21-27 June and this year we want to make sure no one misses the signs of myeloma. Here, myeloma patient, Scott Meech, 55, shares his own diagnosis experience and how he is committed to promoting the benefits of early diagnosis.

I was diagnosed with myeloma in the summer of 2019, nearly 20 years after my sister died from the same illness, so while being a patient now I also have the experience of being a family member. During my sister’s treatment, I was assessed as a potential transplant donor and was diagnosed as having MGUS myself so the regular monitoring ensured that my progression to myeloma was spotted early and treatment began before I suffered any severe symptoms. After treatment and stem cell transplant (SCT) over a year ago, I am feeling very well despite having suffered severe peripheral neuropathy which continues to be an issue. 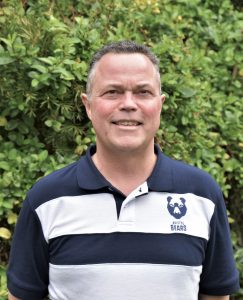 Due to my family history and early diagnosis with MGUS the progression to smouldering myeloma (briefly) and then full myeloma was a terrible shock but not the total surprise that it is for many. The knowledge that I could develop myeloma was a burden and a fear that my wife, Samantha, and I shared for many years. I often wonder if it would have been better not to have known it was coming but I have benefited enormously from being well prepared and from being able to start treatment before any serious symptoms occurred.

It is now about two and a half years since my diagnosis and confirmed that I was a high-risk category, so we were under no illusions about the challenges that lay ahead but I have been able to maintain a positive attitude and I am now in remission. Telling our children, Henry and Lily, was one of the most difficult moments, particularly as Lily was just starting university so was moving to Birmingham, but they have both been a wonderful support as have the rest of my family and ‘team’.

My desire to understand the disease and engage with the medical professionals in the decision-making process has helped me feel a little more in control and I have also found it very therapeutic to write a blog that I regularly updated throughout treatment.

I have had quite a long relationship with Myeloma UK, supporting the organisation for many years prior to diagnosis including completing the London Triathlon to raise sponsorship in 2005. I think it’s wonderful that we have a specialist charity for this relatively uncommon cancer. For me, the quality of the information and advice has provided a huge amount of my learning prior to and during treatment, and it’s an amazing resource that helps patients and carers get their heads around this complex disease. Prior to my treatment I was lucky to have been put in touch with Judy Dewinter who was Chair of Myeloma UK at the time. Judy kindly found the time to meet with me, she inspired me to want to work with Myeloma UK if I had an opportunity to do so, and I have recently joined the patient advocacy the Advocacy Partner Panel and I am really excited about being involved with such a fantastic group. 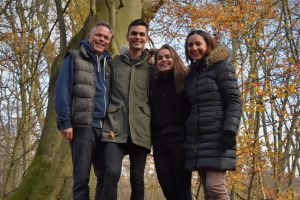 Increasing awareness of early diagnosis is such an important campaign for me. I have personally seen the impact and complication of late diagnosis in the experience of my late sister while also seeing the huge benefits of early diagnosis in my own case. Unless there is a definitive cure for myeloma the best thing we can do for future patients is to ensure that they are diagnosed in a timely way.  Just imagine the massive improvement to life quality that the patient population would gain if one-third of diagnoses were not made after a visit to A&E with the fractures or kidney damage from a progression that was entirely predictable. It would be wonderful if a screening and testing process could ensure more timely intervention and treatment. We simply have to work to change this.

This Myeloma Awareness Week, don’t miss myeloma – get your symptoms checked. Learn more about the symptoms of myeloma here.