A Life Worth Living – Geoff’s story

Myeloma UK has launched the A Life Worth Living report on the impact of delayed diagnosis on quality of life of myeloma patients in the UK. The report found that 34% of myeloma patients visit their GP at least three times before getting a diagnosis; this is double the cancer average.

Myeloma patient Geoff Duke shares his story and the impact delayed diagnosis has had on him. 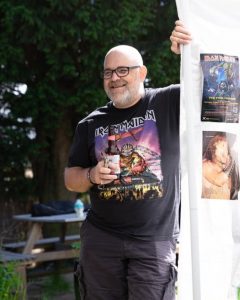 Despite collapsing at work and at home on numerous occasions and pleading for months with his GP to order a blood test or scan, Geoff Duke was repeatedly told “tests cost the NHS money” and sent away with painkillers.

At his wits’ end, the father-of-four from Washington, near Newcastle, eventually left his GP surgery in 2015 and registered at another practice where a routine ‘new patient blood test’ picked up abnormalities. Within a week, at the age of 42, he was diagnosed with myeloma and given a prognosis of three years. Thanks to a clinical trial he is still alive today.

“I knew there was something seriously wrong with my back and I specifically asked the GP to do a blood test or a scan but I was told I was getting old, that tests cost the NHS money and that I would have to learn to live with it. I’d had back pain and bone pain since at least 2002. It kept getting worse. I kept collapsing on the floor so paramedics were in and out. I couldn’t work.”

“I got tired of having the same conversation with the GP all the time. I just thought, ‘How bad do things have to get before you do something?’. There were times when my back would seize up completely and I would be off work for weeks. I loved my job and I didn’t want to miss work.

“If I hadn’t changed GPs and had a routine blood test done, I quite possible might not be here today – that’s the reality of it.” 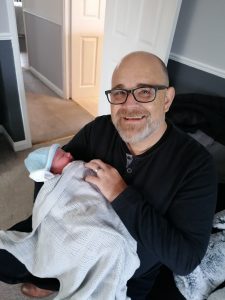 Thanks to his treatment, Geoff is now in remission, but life will never be the same again. Avoidable delays in diagnosis have caused irreversible damage and seriously impacted his mobility. In 2018, he was diagnosed with back fractures and spinal compression caused by myeloma.

“I spent a lot of time in and out of wheelchairs or using Zimmer frames. The effect on my life has been huge. My mobility is pretty bad and I walk with a stick now. It has affected my mental health a lot. I had to retire from a very good job that I was good at.”

While he still struggles with the fact that his cancer could have been caught earlier, had his GP been willing to listen and acknowledge his pain, Geoff knows he cannot change the past.

But he hopes that sharing his story will help Myeloma UK to raise awareness of the impact a delay in diagnosis can have on patients’ quality of life and ensure others are spared unnecessary pain and potentially avoidable complications.

“Myeloma is the worst kind of cancer. It’s prolonged, there is no cure. There’s no ringing the bell. When you relapse you go through it all over again. There’s no end game. Even when you go in remission, the underlying cancer is still there. But it didn’t have to take so long to be diagnosed. Yes, it’s a rare disease and not many people my age have it, but I’m part of a myeloma support group on Facebook and it’s always the same story: people are presenting with the same things – back pain and bone pain – and they’re dismissed. If my GP had just done a blood test to rule it out, I could have been treated earlier and I could have started the journey sooner. I don’t want the same thing to happen to other people.”

Donate now to support our vital Early Diagnosis Programme so that more patients get an earlier diagnosis and can live longer, fuller lives.

Read the full A Life Worth Living report.